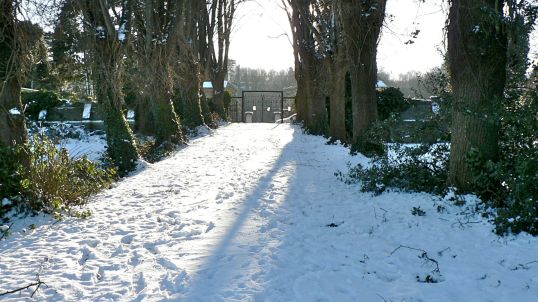 While reading a poem entitled Antarctica by Michael Symmons Roberts, I came across a new-to-me word – katabatic.

To quote the relevant verse (I recommend the whole poem and Drysalter, the book it occurs in):

No one sleeps alone here, and only fishermen dream
of wax-white orcas, blind and red-eyed, circling
under ice-sheets swept by katabatic winds.

This phrase refers to winds that blow downhill – a bit like invisible skiers. The word is usually found with ‘wind’, but can be applied to other downhill things. There is a noun – katabasis.

There are other poems using the word. Lucy Tonic has written one called Fever that begins:

So Roberts isn’t the only poet to associate downhill winds with cold.

On the hot side, katabasis has been used by Randa Ayash-Abikaedbey to describe the descent into hell.

It also seems to be used by academics in discussions of poetry, as in Heaney, Virgil, and Contemporary Katabasis by Rachel Falconer. In the academic world katabatic poetry is narrative rather then lyrical.

Having read all this varied material, I have a vision of a poem about hell surfing a down-flowing wind through the Antarctic wastes.